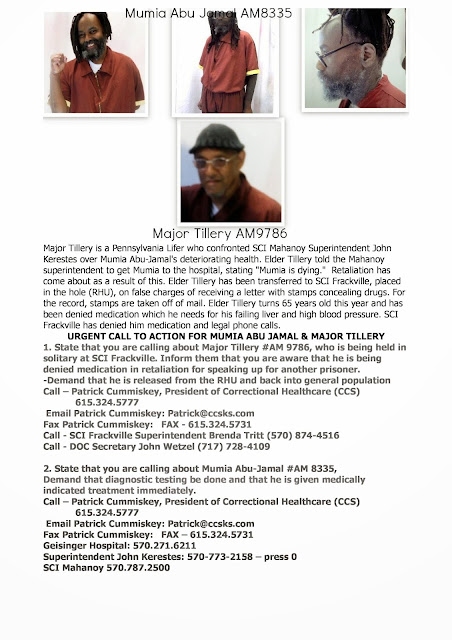 Article From Human Rights Coalition
"...Elderly man thrown in solitary and denied medication for helping another prisoner Submitted by andys on Sat, 05/09/2015 - 7:52pm Major Tillery is a PA lifer who in March 2015 confronted SCI Mahanoy Superintendent John Kerestes over Mumia Abu-Abu-Jamal’s deteriorating health – spreading skin problems, lesions and scabbing over his whole body, rapid loss of weight, disorientation. Tillery told the Superintendent point blank to get Mumia to the hospital, stating, “Mumia is dying.” Kerestes told Major Tillery to “take care of himself.” Major answered back, “taking care of Mumia is taking care of myself. " Days later Mumia went into diabetic shock and was put into a hospital ICU on an insulin drip. He had a life-threatening sugar glucose level of 779.
In retaliation for aiding Mumia and filing his own grievances about a skin rash affecting himself and half the inmates on his block, Major Tillery was transferred from SCI Mahanoy to SCI Frackville without notice and without his property. Now in further retaliation, he was put into the RHU (Restricted Housing Unit, or the "hole") on false charges of receiving a letter with stamps concealing drugs. Major, who turns 65 this year, has been denied medication he needs for his failing liver and high blood pressure. SCI Frackville has denied him even a legal phone call. Major Tillery's daughter, Kamillah, received a letter from her father saying, "This is more retaliation for helping Mumia. They transferred me from Mahanoy, now set me up with this stamp with drugs. They take the stamps off all the mail, so who would even do this? I don't even know the return address on the letter. They are denying me my meds and messing with my food. I knew they would retaliate, but didn't expect this one." Major Tillery risked his health and safety to stand up for another man when it counted-now it's our turn to stand up for him! His family is calling on all human rights defenders to protest this retaliation- call now!"http://hrcoalition.org/?q=node/332

Posted by Nancy Lockhart at 8:40 AM No comments: